SUNNY: GUEST POST and EXCERPT "One Week" by Elisabeth Staab 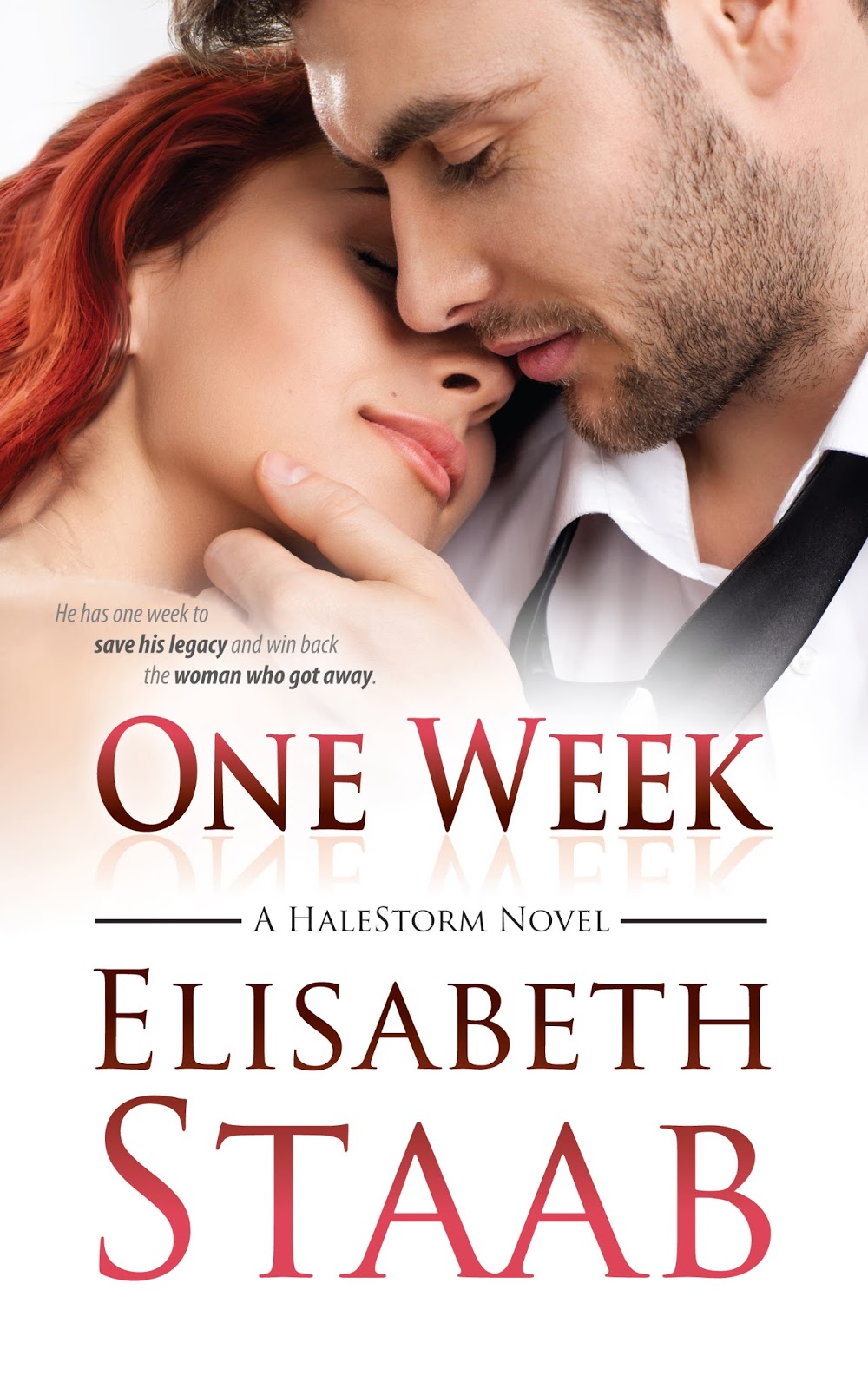 BLURB:
HE HAS A LEGACY TO SAVE…

Michael Hale's company is in jeopardy. In the wake of his father's death and transitioning to CEO, projects are circling the drain and that may cost him everything. Come to find out, the consultant hired to fix things is the "one who got away" many years ago. This time he's playing for keeps, and he intends to win.

SHE SHOULD NEVER SAY NEVER…

Elise Jackson swore she wouldn't come near Michael Hale again. He sucker punched her professionally, and he broke her heart. Still, a job’s a job, and they can both be adults. But high emotion and late nights working lead to passion neither of them can deny.

They have one week. Can the two of them pull Michael's company out of the fire and heal their old wounds?

Available for purchase at

So what is it about office love affairs? Of all the popular “tropes” the boardroom romance seems to be bigger than ever. Why on earth?

Well, I have a few theories:

1) A hot guy in a classy suit is nearly as appealing as a hot guy out of a classy suit.
2) Nothing drops knickers like confidence. Not arrogance, but confidence.
3) Romance in the workplace, even if not strictly prohibited, carries an air of the forbidden. Anything forbidden heightens tensions, making the sexy even sexier.
4) Did someone say after-hours office sex?
5) A powerful man who will do whatever it takes to win the woman he loves? *swoooooon*
6) Intelligence can be even hotter than hotness, and it’s kind of a given that anyone who’s climbed a corporate ladder or two has more than a few brain cells to rub together. Personally, I dig a guy who scores high on the smart-meter.

Office environments can make for interesting situations. You see the same people every day. You have lunch together, maybe even dinners and happy hours. Sometimes you get to know people in interesting ways, you get close, and you might work long hours late into the night in your most attractive clothes. Would you call that a recipe for sexual tension? It sure could be.

When I wrote One Week I decided to put a twist on my corporate romance. Everyone loves a hunky, powerful CEO. But I like to see what a guy is made of when he’s under pressure. How does he respond? Who does he turn to? I gave him a company at risk of ruin. A family who had turned against him. At the start of One Week Michael Hale is unmoored and left with very few people he is willing to trust when Elise enters the picture.

I also wanted Michael Hale’s heroine, Elise, to have equal footing in the relationship. While slightly younger and perhaps possessing a lighter stock portfolio, she has the brains and the financial stability to stand toe to toe with Michael, without feeling like she needs his approval. She isn’t a damsel in distress looking for Michael to rescue her. She is there to pull his ass out of a sticky situation.

When the rubber meets the road, we see Michael pull out the big guns and go in ready to pull the trigger with everyone except Elise, and that was my favorite thing about him as a character. His father had just died, his brothers were estranged, the one thing he had was the company his father built, and fuck anybody who tried to stand in his way. All that aside, when it came to Elise? She got away once, he isn’t willing to let that happen again. And I so adore a man who will do whatever it takes to win the woman he loves (reference point number 5, above).

Remember Westley in The Princess Bride? “As you wish.” Hot, right?

What about you? Does a hot guy in a suit steam up your windows, and if so, what’s your favorite quality in a suit-wearing hero?

“I should have looked for you.” He wrapped his arms around her and groaned aloud at the warmth and softness of her skin against his. The rough texture of her nipples against his chest, the dampness of her hair on his shoulder. “Just touching you makes me crazy. My God, Elise. I should have known. Fuck, I did know, and I ignored it. I’m so goddamned stupid.”

“I am stupid.” Michael gripped her hips—fucking luscious, curvy hips—and ran his hands up that amazing hourglass arc in her waist and over her shoulders, reveling in the magic of Elise’s hands giving him the same treatment. “I’m stupid because I thought I could push you away all those years ago and I’d forget and find someone else who turned me on as much as your hand bumping my knee under a cubicle desk. Christ, I tried to tell myself it was all innocent, but I lived for every second.”

“Oh my God.” Elise’s eyes flew wide, her cheeks flushed in the low light of her bedroom. “I had no idea.”

“You must have, if you gathered up the nerve to kiss me.” He bent her back, one hand braced between her shoulders, the other gripping her ass, trailing kisses along her jaw. Their only-for-tonight agreement be damned, already he didn’t want to let her go.

“I hoped.” She gripped his shoulders, smiling. “If I’m being honest, all that accidentally bumping your knee wasn't so much an accident.”

Elisabeth Staab still lives with her nose in a book and at least one foot in an imaginary
world. She believes that all kinds of safe and sane love should be celebrated but she adores the fantasy-filled realm of paranormal romance the best. She lives in the Washington DC area with her family and one big scaredy cat, where she loves to spend time with good friends, go dancing, collect wacky coffee mugs from which to drink her favorite beverage, and sing off-key in her kitchen (when she isn’t making characters fall in love, that is).

One winner will receive a signed paperback, a tote bag, some swag, and a Starbucks gift card

Posted by Wkonsunshine at 12:30 AM