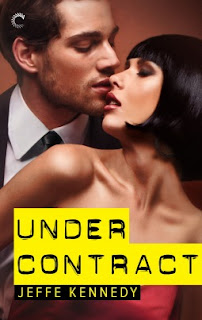 Under Contract
by Jeffe Kennedy
Falling Under series, Book #3

Ryan Black has admired Celestina Sala from afar for years, her lush body and sensual nature calling to the dominant in him. For just as many years, Celestina was off-limits—married, proud and self-sufficient. But all that has changed, and now Celestina is in debt and in need…and available. Ryan proposes a contract: he'll pay off her debt if she gives herself to him in bed, yielding control in exchange for the pain and pleasure he'll bring them both.

There are words for women who take money for sex, and none of them are nice ones. Celestina never thought she'd have to sink this low, but giving up control sounds more enticing than ever before. And suddenly it's not about having to give in to Ryan. It's about wanting to.

But when Ryan's dark past comes to light, they may both be in over their heads. The terms of his contract say her body is his…but her heart may be another story.

One thing is for sure—now that Ryan has Celestina, he can never let her go.

Jeffe Kennedy is one of those authors who has a fantastic social media presence and is very interactive with her fans.  I’ve enjoyed following her across multiple platforms.  Yet, I had never read any of her books, until now.  With an opportunity to read this ARC, I jumped at the chance.  And I am very glad I did.

Under Contract is a revelation. On the surface, it seems like an unethical offer – money for kinky sex.  Or from a purely business perspective, this is merely a transaction -  a simple exchange of goods and services, right?  Celestina is in deep financial trouble and Ryan has the means to get her out of it.  In the beginning I was appalled at the proposition.  Who, but a prostitute, would accept that kind of offer?  It would be easy to pass judgement on Tina and I did.  Until I learned more about her situation and what is at stake.  I could certainly understand her desire to take care of her nieces after their mother and her twin died.  I could understand all the elements that drew her to this proposal.  It is one the author’s strengths that she is able to make Tina sympathetic and even heroic.

Surviving a brutal childhood, Ryan ran away and re-created himself to be the millionaire businessman he is today. I’m not a huge fan of the rich businessman taking advantage of a vulnerable woman storyline.  Luckily, this one goes well beyond that mostly because Ryan is a self-made man.  With his wealth and resources, he can (and does) hide most of his insecurities, except with Tina.  I enjoyed how he made himself vulnerable to her. It gave him just enough chink in the armor to make him infinitely likeable.

Jeffe Kennedy offers keen emotional insight into her characters but they are inside their heads a lot.  Sometime this inner dialogue and self-examination slows down the story a bit.  It takes a while to get to the turning point.  We inch our way through from the business arrangement to the grow of emotions and finally to a place where there is complete honesty with one another.  There are moments of heartbreak as both must come to terms with their past.  Ultimately, I found the ending hugely satisfying.

IN A NUTSHELL:
I’m thrilled to have discovered Jeffe Kennedy’s work.  This book is an adventurous, entertaining, and heart-felt read.  I highly recommend this book.

Thank you to the author for the opportunity to read this book in exchange for an honest review.

Posted by Wkonsunshine at 8:48 PM