Welcome to the Come Together, book 3 in the Cityscape Series, Blog Tour.  We are so pleased to welcome Jessica Hawkins to Love Affair with an e-Reader for an author interview.  Stay tuned for a review of the book and a Giveaway from the Author. 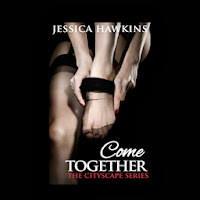 With a single decision, Olivia Germaine’s fantasy has become a reality. Now she is faced with two commitments: one she must make and one she must break. But in order to accept a love she never thought possible, Olivia will have to let go of the broken past that defines her - and of deeply-rooted fears that could ruin everything.

Everything is what David Dylan wants to give her, and it’s what he wants in return. He must prove to Olivia that despite his playboy ways, he’s worth leaving behind the stable future her husband can offer her. David is a man who always gets what he wants . . . but this time he may be fighting for something unattainable.

Can Olivia escape the past that threatens to consume her?

And can David break through to her before it does?


AUTHOR INTERVIEW
Love Affair with an e-Reader is so proud to welcome Jessica Hawkins, the author of The Cityscape Series.  Thank you, Jessica for joining us to share some insight into your stories.

JH: Thank you for having me! I’m very excited to be here.

This is such a provocative series, what was your inspiration for the story?

JH: I’ve always been fascinated by infidelity and the motives behind it. I hoped to take the reader to the brink of it where they’d ask themselves: would I or wouldn’t I? Also, I’m inspired by eye contact, connection. Something happens when you meet eyes with another person, but only the two of you can understand it.

How did you go about doing your research?

JH: I spent a lot of time reading through online forums. The Internet is great for that because anonymity can encourage honesty. I read about people who cheated and people who were cheated on. I wanted to understand it from more than one angle. And not all of what I read was retrospective – many posters were in the middle of their own storm. They might be involved with an affair and want to get out but can’t. Or their spouse had just confessed, and they’re questioning how it’s possible to move forward. I had other methods of research too, but real-life experiences were the most informative and heartbreaking.

Your third book was a more of a character study (still, with plenty of drama).  Without giving too much away, there is loss, redemption and renewal.  What was your favorite part of the story to write?

JH: Great question. The answer might surprise you. There are scenes that made me cry, that twisted my gut, that really got to me. I both love and hate writing those. But the scene that sticks out is in the last chapter. Olivia is watching movies in the den when David comes back to the apartment late. In that scene we see a sort of desperation in David, where he’s finally crumbling from carrying the relationship. I don’t want to give anything away either, but he needs to hear things from Olivia that she could never say before – because of her past and her stunted relationship with Bill. We think of David as strong and masculine; he always gives and can survive on what little she gives back. That scene is a crack in his composure where he needs Olivia to be the one who asks for what she wants instead of the other way around. It could go many different ways.

If you could cast your characters with any actor from the past your present, who would you choose? I’m especially interested in who you would cast in the role of David Dylan, who is such a charismatic and dominating character.

JH: I think it’s important to start by saying that I have these images in my head that 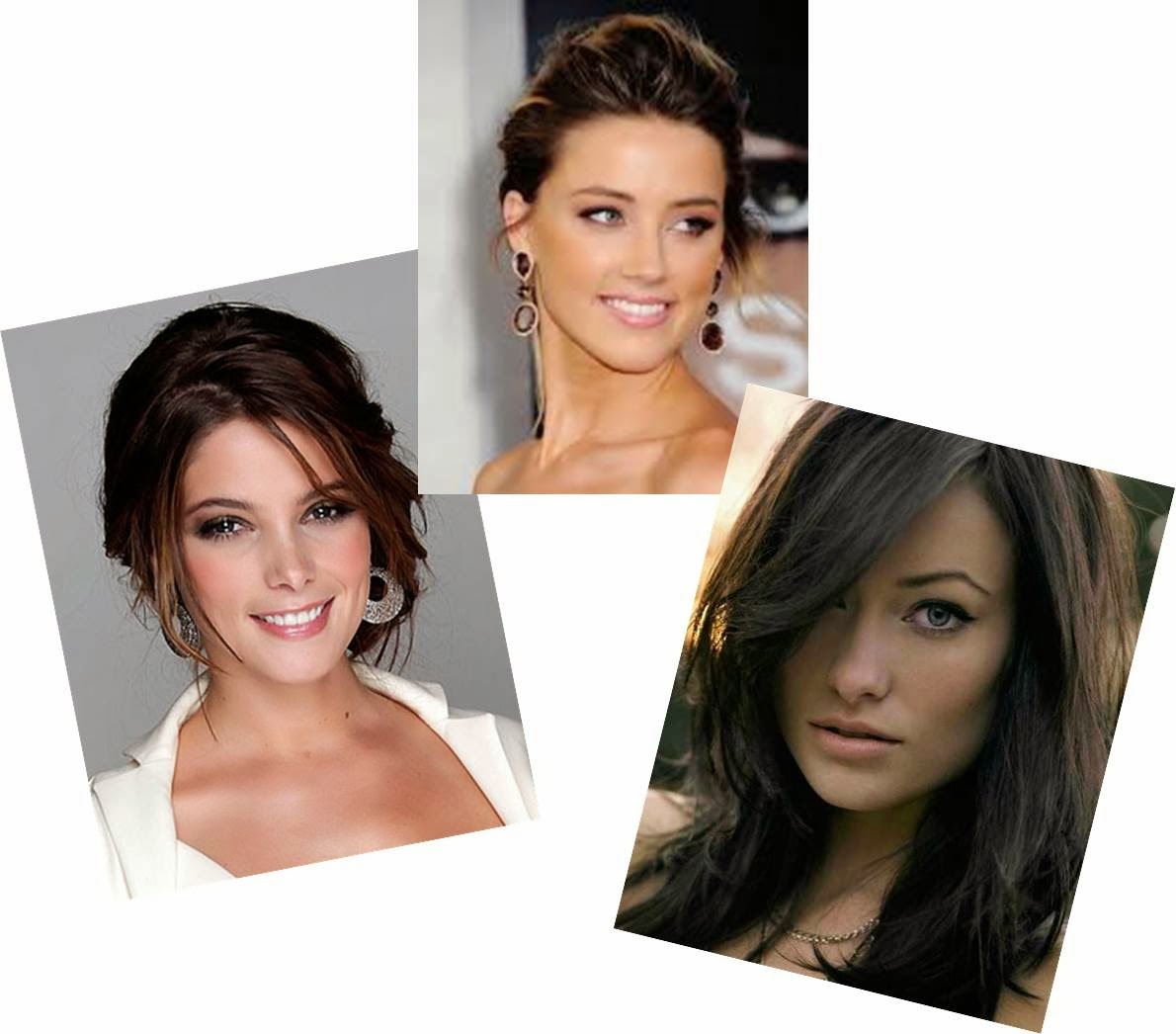 could never really be completely accurate. But, it sure is fun to try and make them real. I see Olivia as captivating: Amber Heard, Olivia Wilde, Ashley Greene. Bill is a little goofy, gangly. Maybe Josh Hartnett or a young Bill Pullman (think While You Were Sleeping). David is more difficult. Physically, I think Reynaldo Gianecchini best embodies my vision – jet black hair, light brown eyes, huge, sexy smile. David is manly and mature, so I envision an established, older man. Jon Hamm, when he puts on his Don Draper suit, is up there in my list. I like that he’s a no-bullshit type. A fan suggested Matt Raimo, and I think he’s just about perfect. 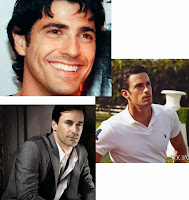 My dream man is Henry Cavill, but I’d prefer to write a character based on him rather than try to fit him into a character like David. They’re each too big for that.

I noticed that this is called the Cityscape “series”, not trilogy.  Will there be more books?

JH: I don’t anticipate any more books. Originally the series was only two books, which is why I opted not to call it a trilogy. But as you can see, a third book is great because it wraps up a lot of loose ends. I like that it’s not required reading – those who want to continue can, but they don’t have to. And although I would never recommend it, it could potentially be read as a standalone.

What can we expect from you next?

JH: I’m asking myself the same question! I want to keep writing, and I have an idea. When? That I don’t know. What? Like The Cityscape Series, it has to do with forbidden attraction.

Thank you, Jessica for sharing your time and insights with us.  We look forward to all your future works!

Thanks again for having me!

Palm Springs, California. She studied international business at Arizona State University and has also lived in Costa Rica and New York City. Some of her favorite things include traveling, her dog Kimo, Scrabble, driving aimlessly and creating Top Five lists. She is the helpless victim of an overactive imagination that finds inspiration in music and tranquility in writing. Currently she resides wherever her head lands, which lately is the unexpected (but warm) keyboard of her trusty MacBook.


Now that Olivia has made her decision, it should be all wine and roses, right? Not quite.  In book three of the Cityscape series, Jessica Hawkins delves further into the relationship between Olivia Germain and David Dylan.  The first two books took us into the sizzling attraction and the agonizing choice Olivia must make.  Now, Ms. Hawkins looks into the aftermath of that decision.  Relationships are difficult enough without the extra baggage of guilt, judgment, and loss.  Olivia's choice changes everything for her.  If she is going to make this work, she is going to have to overcome her own insecurities, her use of being "sensible", "practical", and "stable" as a shield, and confront her relationship with her parents.  David becomes the conduit in which Olivia grows and changes.

For me, this book is about learning to go "all in."  Everything Olivia does up to her relationship with David is safe.  Everything is muted.  David offers her the opportunity to really live, take risks, and see the world in full technicolor. The struggles they face, I would suspect, are the norm given how their relationship starts.  It's difficult to build trust when you begin your relationship from an affair.  It is an interesting character study about building something new from a fractured foundation.  This book reminds us that Happy Ever After takes work.

My only critique of the book is the side story involving Gretchen and Greg.  Given how well the other characters are presented, this part of the narrative feels under developed.  We never really get to know Greg and his attempt to connect with Gretchen is mostly "off scene," so it is difficult to gain any insight into the situation.  Nonetheless, it is not distracting, only a missed opportunity.

IN A NUTSHELL:
Because of the core of the plot, the pace in this book is a little less frantic and the tone is less anxious than the previous two books. It is a nice and necessary wrap up to the trilogy.

BOOKS IN THE SERIES

But when Olivia locks eyes with a handsome stranger across a crowded room, he peers a little too closely and sees emotions she thought she’d buried long ago.

David Dylan, alleged playboy and eternal bachelor, challenges Olivia to confront the life she’s built and to make decisions that could either lead to happiness . . . or regret.

Will Olivia be able to draw the line between lust and love?

And can David respect that line?


Determined to move on with her life, Olivia Germaine has vowed to forget David Dylan. Struggling to keep her head above water, she focuses on her new promotion and refuses to drown in the memory of their night together.

But when Olivia realizes what life without David means, she must decide if she is willing to risk everything for him . . . and if she is ready to reopen the wounds of her past.

Can Olivia move forward with her marriage despite her feelings for David?


For my dual review of these two books, click here


A special treat,Come Undone is on Sale! 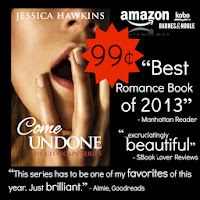 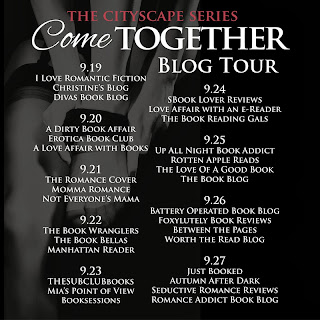 Posted by Wkonsunshine at 10:20 PM